Made a quick plywood cabinet for my shop to house my stereo. Finished assembling the other morning. Walnut frames and polycarbonate sheeting for the doors. Excited to have my turntable hooked back up. I even disassembled cleaned the pots on … Continue reading →

This weeks bounty… part 2, the rest of the haul. This is the rest of the Martin Guitar wood, plus whatever else was there. Lots of rosewood.  May be some guitar size, but a lot of it is smaller.  There … Continue reading → 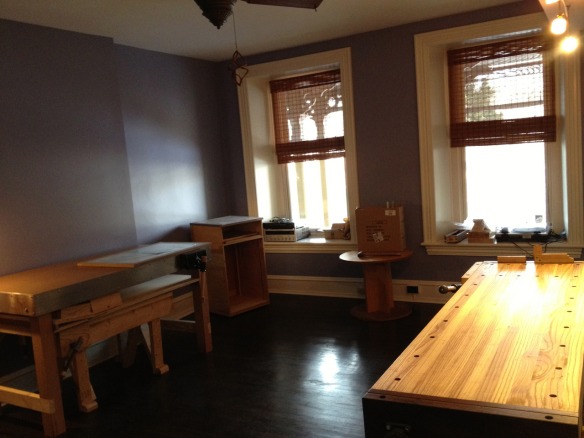 Up early again.  My mind just doesn’t stop sometimes.  I need to work on that.  So since I’m up, here is some nonsense…

Spent about 5 days with my best friend in NC.  Got back late Wednesday.  Had a great time, but was ready to get back and get some things done.

Picked a color for my shop, painting was finished about a week ago.  Started moving things in.  Moved both benches in, now to bring in the tools and all the other stuff.  Got some aluminum bar stock that I’ll use to fabricate rails to hang everything on.  I’ve made these before, kind of like heavy duty picture rails.  All the walls are brick, so once its hung, it makes everything easier to hang and moveable.  Realized last night that I need much better lighting.  Have a few thoughts on a fixture or two to make.

Tried on a new suit and sportcoat because all my old ones are too big.  Picking them up Monday after they are tailored.  I rarely dress up but I have a trade show next week and I want to look sharp.  Had a couple suits custom made in Hong Kong on a business trip a few years ago.  Thankfully they fit my dad like a glove now.  I wouldn’t have gotten rid of them, and I am glad he can wear them as opposed to me storing them in the closet.

Did a voiceover for a video for work as well.  People always ask me to do that stuff.  I hate the sound of my voice, but I guess it is kind of deep.  We have an employee thats going to school for audio and video production.  He had a nice set up with the big condenser mic and pop guard.  Sounded great through the headphones, those mics really bring out the low frequencies.  If I would have known I would have worked up a script and done an alternate parody track in movie trailer style.

Going to pick up more old Martin guitar wood this afternoon.  Think I have all of it but some rosewood backs which were promised to a professional luthier. 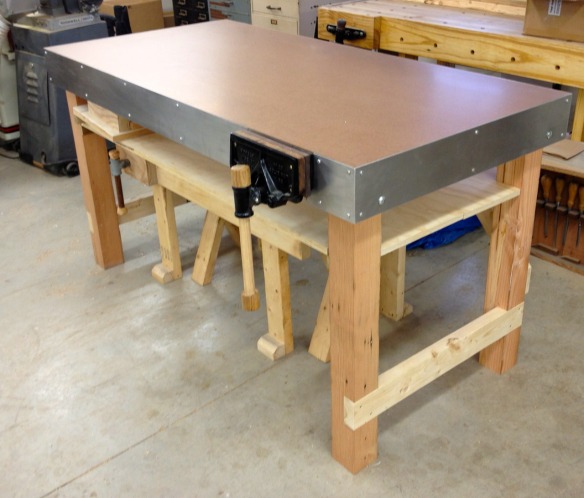 In a world, where one work bench isn’t enough… there lurks another.  Across the room, in the shadows…it sits and waits.  It’s jaws ready to clamp on whatever passes by… Work Bench II… coming soon… to a shop near…me?

Ok, seriously, even though that was awesome and I could have gone on, I finished my other work bench today.  Just added some aluminum facing, a shelf underneath and some bracing.  Hope to be moving this, the wood bench and a lot of my stuff into my shop sometime next week.

Things are moving.  Music room has been repainted.  New bedroom, repainted.  Workshop is next.  I’ll post some pics of that stuff once I get things back in.  Loving all the changes and new colors so far.

Finally cleared the whole room, minus some art work, speakers and a stereo.  Oh, and the cabinet that is locked and I can’t find the key to.  It’s a cool old bar cabinet, but I’ll probably get rid of … Continue reading →

Started another work bench for my new shop in between xmas presents. This will be an assembly/general work bench.  Used old porch posts for the legs.  Plywood and masonite top.  Rehabbed and installed a vise I was given.  I plan … Continue reading →

Scored a couple things today. Picked up the anvil a new friend decided to give me.  Not sure how old it is.  I can barely make out an eagle in a circle symbol under the rust on the side.  I … Continue reading →

Long holiday weekend.  Had a nice time, but missed working in the shop. Bought and fixed up a couple old cast iron paper racks last week.  One for paper towels in the kitchen.  The two tier one for my workshop, large paper … Continue reading →